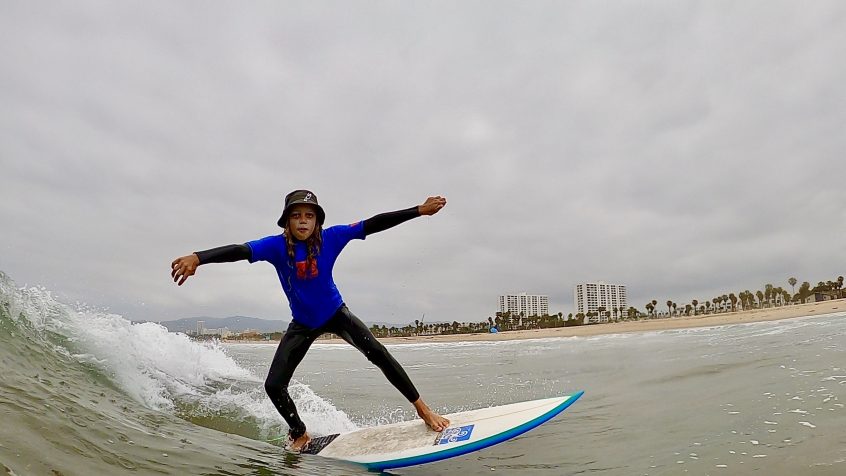 We got out of the car and walked down to where the rest of the surf club met on a green patch of grass. We were at Manhattan beach, one of the three locations that the surf club met, and the most common one. As I walked down to the surf club I looked out to the ocean. Boom! My heart squirmed in my chest as I saw a huge wave come crashing down. I heard my parents go “ohhh.”“yeah Rozz,” said my surf instructor, Gilad, looking at the expression on my face. He is Israeli, and his accent made the “a” in my name sound like an “o,” and his English wasn’t perfect, so sometimes he skipped words. “These waves are big, but they are amazing, I am so stoked.”“You ready,” said my mom with a half exited half worried expression.“Yeah,” I mumbled quietly, beginning to put on my wetsuit. Near the water’s edge we all gathered around Gilad. “Alright everybody.” He said. “We have a big wave today, but I want you to hear me on this. They look big, but they’re not dangerous. It’s only dangerous if a big wave come and you have to throw your board and dive under the wave and your board is hitting your friend. I don’t want anybody to go to the E.R. today, so remember this. STAY AWAY FROM YOUR FRIEND. And remember. Sets normally come in groups, so never take your eyes off the prize. Okay, you can go in.” We all grabbed our board’s and began to paddle out. Before I went in too, I took one last look at the beach, feeling the warm sand in between my toes,and then I plunged into the water. As I finished wading out my feet left the sand and I hopped onto my board. I began to paddle out. Surprisingly I was able to get to the line up (the place where surfers make a line parallel to the beach, so thatwhen you are catching a wave, or about to get a set on your head there is no one behind, or in front of you)without much trouble or delay from the white water but, when I got there I regretted it. Massive waves rolled under me making my heart squirm. The thought of getting one of those huge waves on my head was sickening, I needed to get out, these waves were way too big for me. I couldn’t even imagine what the size of a set (a series of big waves that break a little bit farther out than most waves) would be out here. Where was Gilad? I needed to tell him that these waves were too big for me, but I couldn’t find him. Finally I saw him appear paddling out to the line up with a few other kids at his side. I began to paddle towards him.“Gilad I think these waves are too big for me,” I whined, my voice shaking slightly.“Hey! Look at the ocean! Always look at the ocean, you never know when a set might come.”

Stoked for Summer 2022!!! Already a shredder or Le

#springbreak2022 surfing is ON. At Manhattan Beach

There is no way we could do it with out you! To ou

The bricks of #freedom are super simple #Fun #fam

Hey Freedom, Not sure if you knew, but we moved ba

Freedom Surf Team has been riding since last summe

The pure pleasure of going to the mountains. Getti

New year, new challenges but, staying together is

The mountains were here before us and will be here

Every day is a Holly-Day. It’s unique and need t